One of the impacts of climate change for the UK is that storms are going to get more severe with greater intensities of rainfall. Unless we start climate-adapting our streets now, we had better start getting used to flash flooding.

I should at this point check our privilege because there are places in the world who have long suffered catastrophic flooding and consumption by rich countries has and will only make things worse; by comparison, the UK has been getting off lightly.
I need to separate out a couple of the flooding mechanisms. At the macro-level, there will be issues with how a water catchment operates. By catchment, I mean the area that captures rainfall (or melting snow) which ends up in watercourses. In towns and cities, this will be the rivers that flow through them. The macro issues are those around the ability of land upstream of a place to hold water, because if it doesn't then surface water is going to move pretty quickly through the system. 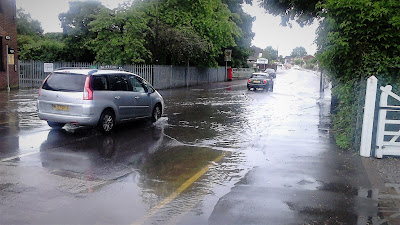 Flooding where a stream turns into a river and
bursts its banks because of surface water is piped into
the stream further up the catchment.
At the micro-level, we're interested in what happens locally (and which is my point of interest this week). We need to be tackling lots of issues, but a town or a city doesn't necessarily have control or influence about what happens upstream, but it does within its own area. Local influence can deal with some of what is coming towards an area in terms of surface water management and reducing what is sent on to other places downstream.
So, we're interested in three things and they are capturing rainfall near where it falls, holding onto it for as long as possible and doing this in as many places as we can. The first two points are about source control; that is dealing with the problem or hazard where it occurs. If we can capture rain where it falls ad hold onto it for as long as possible, the storm event will have passed and the land or drainage system will have more capacity to deal with it. 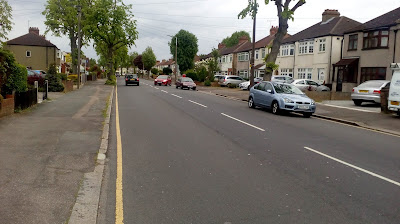 A typical suburban street. Wall to wall asphalt and
front gardens paved over for car parking. A system which
fires rainfall straight into the sewerage system.
The third point is about building resilience on the basis that it is better to have many small treatments dealing with rainfall rather than a few large ones. If a small treatment gets blocked or overwhelmed, there are many others to take up the slack. If a large treatment gets blocked or overwhelmed then there isn't anything to step in. This is where "rain gardens" step in, one of my favourite street elements and which are part of a much larger family of treatments known as Sustainable Drainage Systems (SuDS). 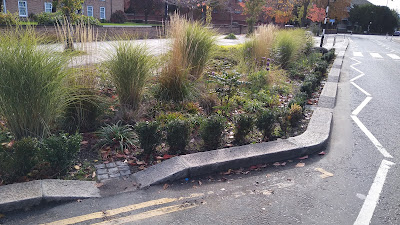 A rain garden in Enfield on Cycleway 20.
I'm using the term a little loosely because there are subtleties in their design and operation, but I'm most concerned with the ability to hold water and release it slowly, so performing a "detention" role. Depending on the application rain gardens can also treat surface water run-off, or at least have it entering the drainage system a little cleaner. This would be performing a "bio-retention" function whereby water is filtered and the organisms within the root structure of plants in the rain garden break down hydrocarbons and other pollutants. 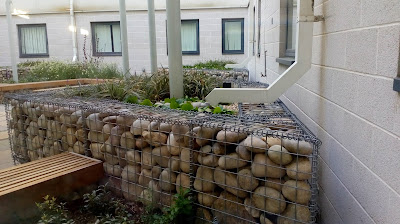 A rain garden being used at the spout of a roof downpipe
getting right at the source. Basildon Hospital, Essex.
The components of a rain garden are fairly simple. The layout needs to allow water to enter the feature and there must be a volume of space which can fill up. There needs to be an outlet for the water when all of the space has been taken up otherwise the feature will simply overflow back into the road or paved area. Planting needs to be able to stand a variety of temperatures and degrees of saturation (including being wet for periods of time). There also needs to be suitable planting media to support the plants. It seems to come as a surprise to some people that chipped bark simply floats away! 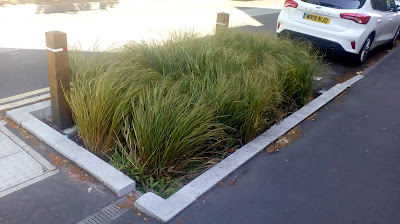 A small rain garden installed as part of the
Greener Grangetown project. Cardiff.
The rain garden doesn't necessarily have to be impermeable. Some subsoil types allow water to percolate directly into them such as ballast. This type of rain garden is an infiltration basin and depending on the situation it might be an appropriate approach, although if the subsoil becomes waterlogged you still need storage volume. Of course, clay soils are pretty impermeable and so water will sit on top of them.
In some schemes, large retention cells are sometimes used for additional water storage and some systems add substantial tree pits. The approach can scaled to whatever is needed. 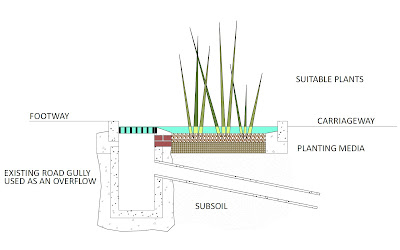 The image above shows a cross section of what a simple rain garden would look like retrofitted in the street. The area holding water is set out within a kerb line and on the carriageway side, there would be a series of slots allowing water in. The level of the planting media would be lower than the carriageway to create a clear volume of storage, but of course, the media getting saturated is also storage. An existing road gully becomes the overflow when water in the rain garden fills up to carriageway level.
It's fairly simple technology and in terms of maintenance, the gully grating is easy to get to and the slots in the kerbs can easily be swept clean - that's another key feature of resilience - easy maintenance created by designs you can get at to clear blockages. It's a pretty simple thing we could retrofit and with a bit of planning, rain gardens could be rolled out during major maintenance works.
Posted by The Ranty Highwayman at Saturday, August 07, 2021