With warm, but not too hot weather forecast, I decided to head off early for another long pootle to see what's changing around London. I like to have an aim and so this time, I headed South Of The River to have a look at another Low Traffic Neighbourhood - Railton, in the London Borough of Lambeth.

The LTN is to the southeast of Brixton town centre and encompasses streets in a broad corridor between Brixton and Herne Hill stations. As with many changes to how streets are used in reaction to the Covid emergency, Railton was implemented on an experimental basis using temporary materials. However, in common with many other schemes, there was actually lots engagement predating the roll out which rather contradicts the usual vocal minority claim that the scheme is undemocratic. 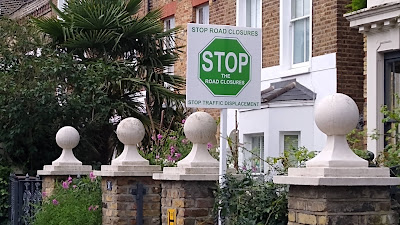 As with other schemes, a local campaign has popped up to stop the road "closures" and remarkably, this includes a few people living within the filtered area (above).
The scheme has its roots in the Brixton Liveable Neighbourhood project which looked at both the town centre and the areas around. You can still have a look at the Commonplace site for the scheme background and in and around Railton Road, there are plenty comments about how busy with traffic and unsafe the area felt and so it was one of a group of neighbourhoods identified for treatment.
In February 2020, Lambeth started to take proposals forward, just as Covid was entering the news cycle. By June, the council had pushed on with bringing forward a scheme using emergency and experimental powers because public transport capacity was slashed. It's a slightly different arrangement to many of the LTNs I have covered because Railton Road is a bus route which needed to be maintained. This means that the filters used were mainly bus gates, but there's some other traffic management such as the no entry, except cycles on Trelawn Road at the junction with A204 Effra Road (below). 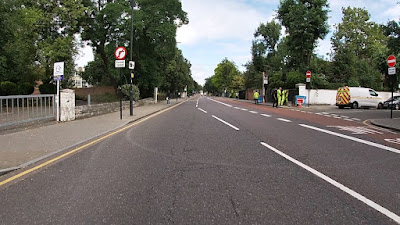 There are also changes to Atlantic Road near Brixton Station whereby a short section south of Coldharbour Lane is only accessible to buses and loading permit holders (below), but there is general access beyond this little buses only section road from elsewhere. 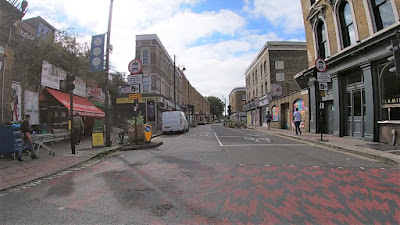 As you can see on the official plan of the scheme below, there are broadly four traffic cells created by the scheme, with the largest being to the southwest of Railton Road itself. 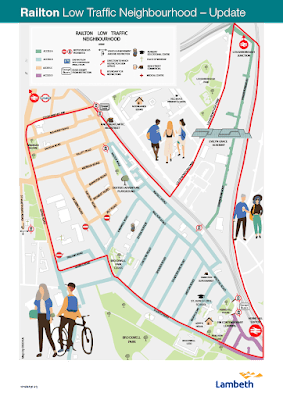 Atlantic Road gives way to Railton Road with a bus gate separating two traffic cells (below). As usual, there is nothing stopping people driving to where they need to get, it's just they may need to arrive from a different direction from what they are used to. 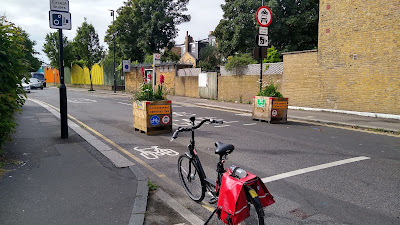 The treatments are simple timber planters with no motor vehicles expect buses signs and bus gate road markings. The filters are enforced by cameras and because it is a bus route, it's probably the only realistic option. As a result, a few drivers will take a chance and this means the area around the filters don't "feel" as safe as they do with a bollard-protected design.
Further south and just off Railton Road, there is another filter at Shakespeare Road, just east of the junction with Mayall Road (below). This creates around 25 metres of motor-free space and another traffic cell beyond. Although, again, it's camera enforced the layout does rather shout no access to motors. 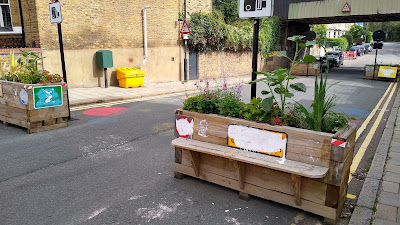 Personally, I think this filter should have had central lockable or overrunable bollard for emergency access because it's not a bus route. In the fullness of time, this link could be redesigned and I think it would be nice with a short section of 2-way cycle track and landscaped space with rain gardens (below) which could still have emergency access - a mini-version of Old Bethnal Green Road. 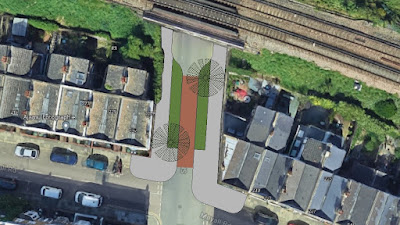 Potential longer term treatment for the Shakespeare Road filter.
Further south still and there's a second bus gate on Railton Road which uses two sets of planters to create a very short section of bus only road flanking some open space. Again, this has the potential for future development (below). 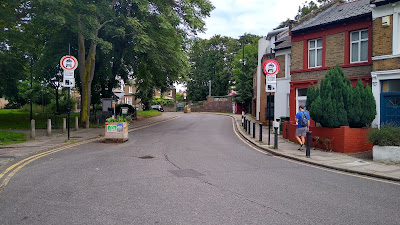 I have one very tiny criticism with this filter and that is there is one house and small block of flats within the filtered area. This means that motor vehicles (strictly speaking) cannot stop outside two addresses. I think this has been done so the filter is easily seen from each direction (there is a double bend). It means one needs to walk 20 metres from the filter to the front doors concerned. It's not significant, but it's the sort of thing the noisy minority like to point at and shout "gotcha" - it's really not an issue, but in the interests of objectivity, I am bound to point it out.
Beyond the second filter, Railton Road continues awhile and ends outside Herne Hill Station (below) in a semi-pedestrianised streetscape meaning there is pretty easy access for residents to this and Brixton Station made possible by the LTN. 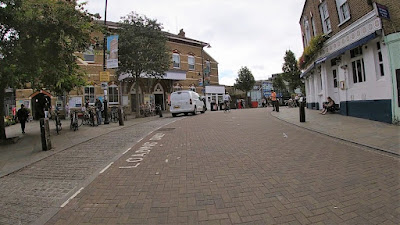 One thing I did notice was lots of the filters and other temporary street changes had been vandalised. You may have noticed it the photographs so far, but anti-democratic people have tried to paint out the various traffic signs to presumably disrupt the experiment. Well, Lambeth has responded by simply adding replacement sign faces over the damage and there have been recent arrests linked to damage to other LTNs in the borough.
Just to round off the development of the Railton LTN, by the end of July 2020, the scheme was in place and being enforced. In December 2020, early data showed that the scheme had dramatically reduced motor traffic in the area (although there was a slight increase on the Coldhabour Lane). The scheme has also enabled lots more cycling. 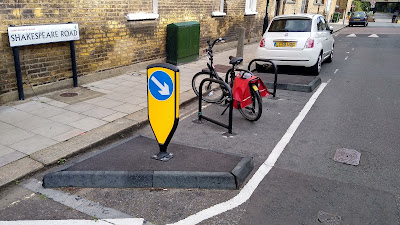 As I looked around the LTN, there was some other little features that are worth pointing out. Opposite the Brixton Advice Centre on Shakespeare Road, some cycle parking has been added (above), whilst outside Hamilton Supermarket, a parklet with seating has been installed, complete with a chequerboard/ chessboard (below). 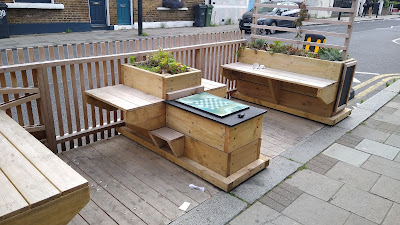 The other lovely little addition is the guerrilla garden I found in one of the side streets (below). 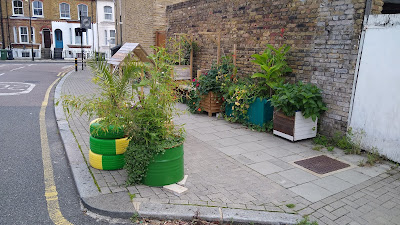 As well as the planters, this little piece of tactical urbanism included seating for small children, such is confidence of local people to be in the street watching the world going by (below). 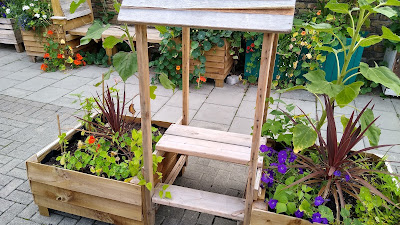 I was cycling around at about 10am (Saturday) and like many of my trips, I can only give a snapshot of what I see. However, people were up and about with a steady stream of people walking and cycling, the occasional bus and indeed, the odd transgressor of the filters. What was very noticeable was the almost total absence of motor traffic and this made the traffic calming, zebra crossings and centre line road markings look very incongruous in the streetscene (below). 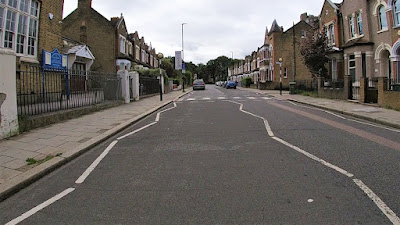 If you think about it, we have in many cases simply allowed driving to expand everywhere to the point where the trappings of managing driver speed and flow spread everywhere. Railton Road looks like a main road because of the engineering, and to that extent, the addition of a handful of cheap filters with some CCTV cameras have actually solved the problems the traffic engineering which cost many times more failed to deal with.
As ever, it brings me back to the point that we can cheaply deploy LTNs to manage the operation of entire places. Instead of investing to try to accommodate through traffic away from main roads, the bulk of our budgets can be used on the actual main roads in terms of walking and cycling protection as well as high quality public realm.
I'll leave you this week with a little cycle through the Railton LTN. In the meantime, you might want to follow the @RailtonLTN Twitter feed to find out more about this wonderful scheme.
Posted by The Ranty Highwayman at Saturday, August 14, 2021