This week's post is a hyperlocal issue, but still worth exploring, if nothing else than to try and unravel the thought process a little bit.

The road network for the Olympic Park in East London was, in many ways, over-engineered for the Games themselves. The years of redevelopment and repurposing the site still continue nearly 10 years later. Of course, there were also years of planning and design before the Games which were awarded to London in 2005 which explains why the roads are very much designed to standards and attitudes of the time.
One location is Northwall Road, specifically near its junction with Temple Mills Lane. It's an area I know from long before the Games with Temple Mills Lane snaking through a post-industrial landscape. Northwall Road, on the other hand, is an Olympic-era road, providing servicing to the area. I'm not entirely sure what the long-term plan is just here, but judging from my visit a few weeks ago, I assume it's going to be retained. 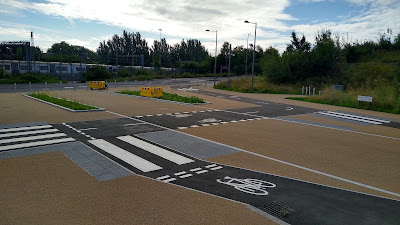 So, the curiosity which has recently popped up is a new section of cycle track just set back from the junction with Temple Mills Lane (above). 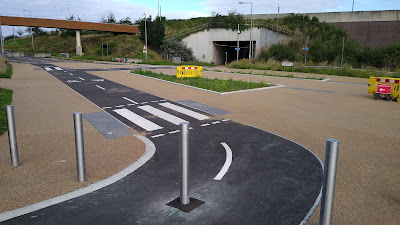 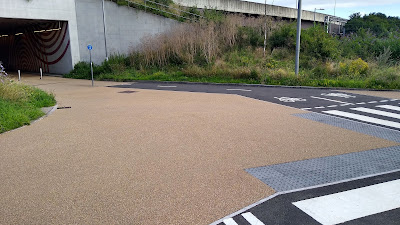 Unfortunately, the layout becomes shared-use within the tunnel which is a shame, because had it been properly extended, it would have met with a 2-way cycle track on the northern side of the A12, recently built by the London Borough of Waltham Forest, providing yet another protected main road into the borough.
Northwall Road itself is currently closed to through motor traffic (it was being used for filming on the day of my visit). There are a pair of short 1-way cycle tracks providing access to and from the 2-way cycle track (below). The cycle tracks are short and provide transitions to and from painted cycle lanes on Northwall Road (below). 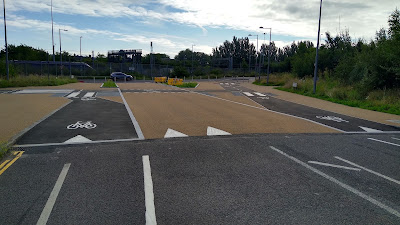 1-way cycle track transitions. Also note the footways
and the carriageway is the same colour.
So far, so logical. The concept of using a 2-way track bent out from a main road with connections to a pair of 1-way cycle tracks into the side road is good as it protects people within the entire junction. 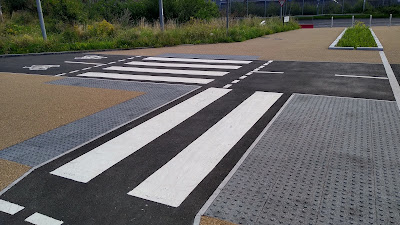 But then we start noticing the odd details. The 1-way cycle tracks don't have curved transitions into the 2-way cycle track. The kerbs literally meet at 90° which means it is pretty much impossible to stay in the cycle track for some of the turns (above); these would be impossible with many non-standard cycles. The transition from Temple Mills Lane features a sharp bend complete with a steel bollard in the middle of the cycle track (2nd photograph above).
We also notice that everything is at the same level (below). There is no tactile information (a kerb upstand) to help guide those who need it and the footway, cycle tracks and carriageway are all at this one level. 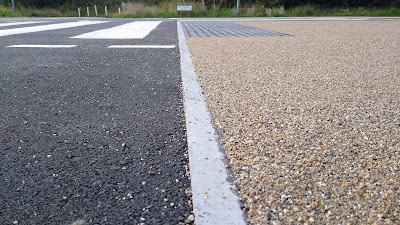 We also have the carriageway and footway surfaced in the same buff surface dressing (see 4th photo above). Apart from the fact that this surfacing always ends up with tiny stones coming loose making it a slip risk, it is another feature which is going to make it hard for some people to distinguish space for different modes. 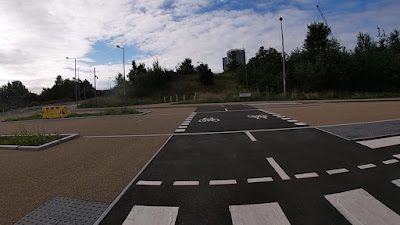 The 2-way cycle track carries on over the carriageway of Northwall Road between "elephant feet" markings. This could mean that in the future the crossing will be signalised or operated as a parallel zebra crossing (with stripes added on the pedestrian side for the latter). I guess this depends on how busy the road will eventually be. 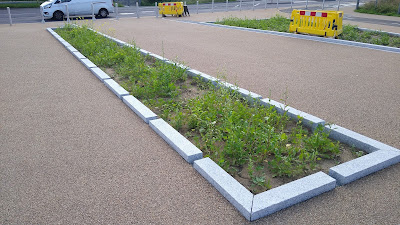 Finally, there are a couple of little rain gardens which is nice to see, although these could have been far more extensive given how much paving there is within the junction and so they don't really fit into the street scene.
So there we have it, a little curiosity which is good in principle, but poor in execution. I have to wonder, that in all the years since the Olympics were first announced, why are layouts still being delivered this way? I'll leave you this week with a quick video of the layout.
Posted by The Ranty Highwayman at Saturday, September 18, 2021