I've seen lots of noise on Twitter about the "pop up" cycle lane on Chiswick High Road in the London Borough of Hounslow.

Cast your minds back to the heady days of October 2017 when Father Michael Dunne of The Church of Our Lady of Grace & St Edward on Chiswick High Street asked his parishioners to pray that Cycle Superhighway 9 got scrapped. He suggested that the scheme would "do more harm to the community than German planes during WW2". 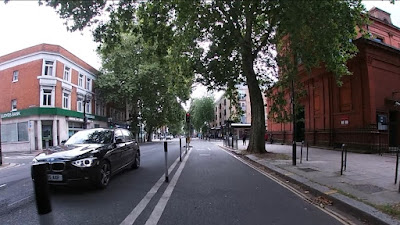 The Church of Our Lady of Grace & St Edward (right).
Still standing and not under any apparent threat.
Not wishing to spark a theological discussion, but it seems that at the very least Mother Nature* does in fact move in a mysterious way because some three years later a pandemic descended on the land and the London Borough of Hounslow along with Transport for London implemented a pop-up version of what is now called Cycleway 9 to provide emergency transport capacity. Anyway the consultation page for the original scheme is here, along with some updates and the current scheme has a page here. (*many faiths or none are also available).
The scheme was rolled out in December 2020 and delivered a two-way cycle track on the southern side of Chiswick High Road. The scheme features a wand-protection for the cycleway (below) between Goldhawk Road and Heathfield Terrace which then turns into Heathfield Terrace as an advisory route. 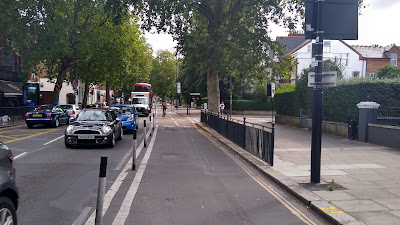 The main cycleway project includes banned turns and movements for general traffic along the route, works for bus journey time maintenance to offset the loss of sections of westbound bus lane (including a bus gate on the eastbound approach to Acton Lane to improve reliability), floating bus stops (below) and various changes and moving around of car parking and loading. 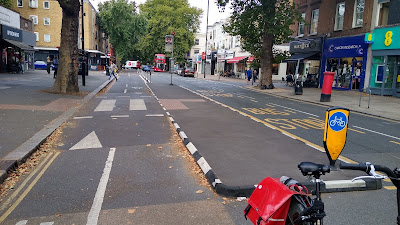 Of course, there are cycle signals being used throughout the scheme (below), although in some locations it takes a very long time to get a green. 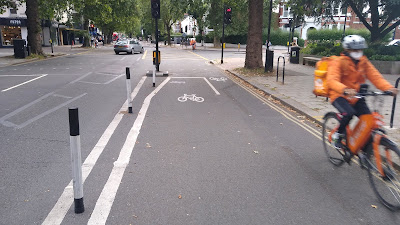 It's a competently designed and installed scheme which makes use of simple materials and as kerb lines haven't generally been touched. It's both fitted well within the existing carriageway and it has some locations which feel compromised such as the zebra crossing by Old Market Place (below) which really needs a larger island between the carriageway and cycle track. However, many of the compromises actual stem from the old motor traffic layout. 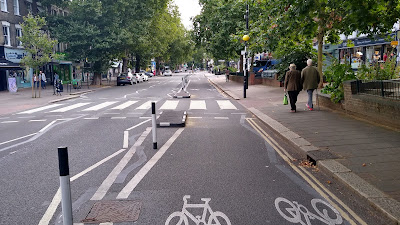 As many will know, I do prefer with flow cycle tracks in situations like this, but the choice of two-way is pragmatic given the speed of implementation. The scheme has created genuine space that everyone who wants to cycle will feel safe in, it's just a shame it is relatively short. 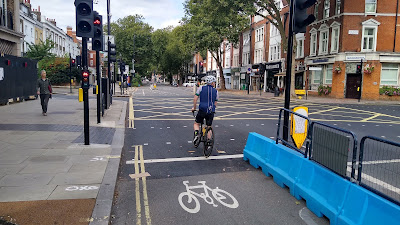 However, what Chiswick High Road proves is that there is space for cycling on those streets which are both busy from a shopping/ business point of view and where there is still a fair bit of through traffic (of all types).
In this location specifically, we've been told by people who don't want people enabled to cycle that the parallel A4 should be used, but the problem is that the shops, businesses and other destinations are on Chiswick High Road and so it is right that people are protected from motor traffic here.
At least on the late Saturday morning I visited there were plenty of people around and none of the gridlock that the antis go on about. What needs to happen next is for some low traffic neighbourhoods to go in along the corridor to connect up with C9. I'll leave you this week with a ride through.
Posted by The Ranty Highwayman at Saturday, September 25, 2021