One of the things which often comes up is how can we provide space for cycle tracks where there is narrow highway space, a subject I had a look at back in the Summer.

This week, I want to take things tighter to look at a very common narrow space problem which is the kind of location that people will need protection, but where heads are often left being scratched. Bridges.
In many places we have bridges built at a time where space for walking was barely thought about, let alone cycling, although the bridges would have been built where there was far less motor traffic about. The consequence of this historic efficiency is we have lots of roads where the bridges create pinch points, even when there is plenty of space either side.
While it's not unusual to see additional parallel pedestrian bridges added (although these seem to be innovations from a generation ago) we're stuck with layouts that are simply impossible to add cycle tracks to. We might have options to build more parallel bridges, but in urban places this is often tricky space-wise. So what are some other options? 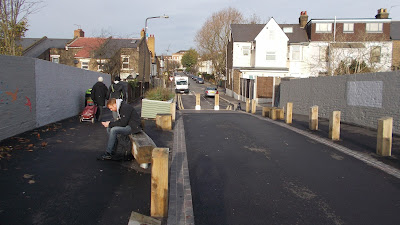 The simplest of course would be to remove the motor traffic to leave a quiet street where cycle tracks are not required. Above is a photograph of West Avenue in Waltham Forest, London. It's an interesting piece of opportunistic design because this street goes over a railway bridge which had structural issues.
The brick parapets (the walls either side of the road) on older bridges were never designed to withstand vehicle collisions. Using a risk-based assessment, they often end up with some sort of containment kerb or barrier to protect them as a collision would end up with masonry all over the railway which is obviously a bad thing.
You can go back in time on Streetview to see temporary protection barriers. However, as part of a filtering scheme here and on the parallel East Avenue, closing the bridge to motors has removed the main risk to the structural integrity of the bridge and delivered part of a low traffic neighbourhood and nothing else is required. Walking has been given lots more space and the bridge is an incidental place to rest with benches and planting. Other than routine maintenance, a significant structural risk has been removed. 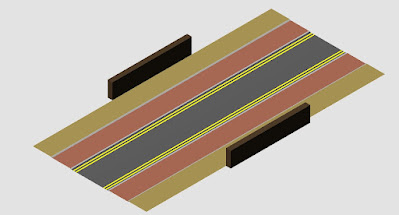 If we have to maintain access for motor traffic, then maybe the way forward is to switch to one way for general traffic and 2-way for cycle traffic, although volumes of motors will guide the level of protection. For example, local motor access may just require a simple one-way street with 2-way cycling. If busier, then a pair of with-flow cycle tracks and a single one-way traffic lane might do the trick (above).
If two-way traffic has to be maintained, then we can have shuttle working. This will have an arrangement whereby we maintain the pair of with-flow cycle tracks, but motor traffic takes in turns to drive through under traffic signal control. 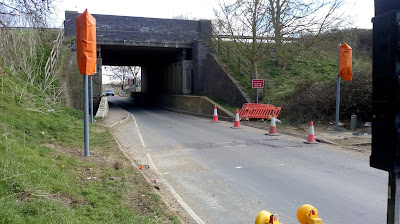 The example above (running under temporary signals when I visited) is Buckden Road near Buckden in Cambridgeshire, where it runs under the A1. The signals allow shuttle working under the bridge for general traffic while maintaining access to a footway on the left. This was a small part of major works constructing the A14 junction with the A1.
In the finished arrangement which can be seen in Streetview, this is now fully paved with a walking/ cycling/ horse riding path on each side of the bridge which gives up on either side. The correct answer here would have been to construct a separate tunnel for non-motorised traffic, but this seems to be an alien concept for UK works promoters, especially on the really large schemes where money is available.
I looked at the problem for a piece of work and postulated an arrangement where the existing bridge had to be used. I imagined cycle tracks either side of the bridge with signals and stop lines as with the road (below).

The idea was that the signal arrangements would detect approaching cycle traffic on one of the cycle tracks. Oncoming traffic (general and cycle) on the other side would get a red to allow an advanced green for cycles with the following general traffic then getting a green signal. If there was no cycle traffic, then general traffic would simple shuttle. People on foot would use the footway (albeit narrow).
The alternative arrangement could be to detect any cycle traffic and then hold both general traffic flows until cycle traffic had cleared the shuttle working area. Either way, the main drawback with the arrangement was making sure the layout through the tunnel gave a really obvious route onto the cycle track on the other side because in one of the directions, people who missed the other cycle track would end up on a slip road. The additional tunnel would be the best solution.
A slightly different, but perhaps more intuitive layout could be done using with-flow cycle tracks. The sketch below actually maintains 2-way flow for general traffic unless cycle demand is triggered. A cyclist coming from the left would trigger a red signal for traffic coming from the left and get a green to enter into the carriageway. A few seconds later, the traffic coming from the left would get a green with that few seconds allowing someone cycling to clear the bridge and access the cycle track on the other side.

Meanwhile, general traffic from the right would simply continue with a green signal until cycle traffic is detected coming from the right and so the sequence would continue. The management of general and cycle traffic on each side of the bridge would run independently of the other. This model could of course be used in a situation where general traffic is also shuttle working if the bridge was even narrower.
An alternative would be to use cycle gates. I guess the example above is for all intents and purposes cycle gates, but there are layouts more conventionally recognised as such.

Above is an extract from LTN1/20 which explains how they work in terms of signal arrangements, although this is generally something used at junctions such as Queen Street Place in The City of London. Cycle gates are essentially signal controlled advance stop lines at junctions, but in the sketch below, there isn't a second stop line because it's not a junction.

Here, two-way general traffic is maintained and like the previous layout, this will just operate under a green signal in each direction. As cycle traffic approaches from the left, it's detected and general traffic coming from the left is stopped at the stop line. Cycle traffic then moves ahead onto the bridge and a few seconds later, general traffic is released as cycle traffic clears the bridge.
I didn't know it, but when I cycled the A34 Blue Route in Birmingham earlier this year, there is a bus gate arrangement exactly like this over the Birmingham & Fazeley Canal in the southbound carriageway - same principle.

Finally, a cycle gate which operates like a junction arrangement could be used for shuttle working, although this gets quite complex (above). Cycle traffic coming from the left would be held if general traffic from the right is running, otherwise there would be a green allowing access to the second stop line. As general traffic from the right stops, cycle traffic from the left gets a green with general traffic behind getting a green a few seconds later.
Of course with a lot of this, the best outcome would be a new bridge or tunnel, but that of course is a big financial investment which might never happen in our lifetimes. We do have options, although it is worth noting that traffic signals are not always obeyed.
Even if a closure isn't viable, we can separate people cycling in time through these pinch points and so it's not really a technical issue as such. Of course, if cycle flows and traffic flows are high, then both modes are going to be delayed, but that's a problem for another day.
Posted by The Ranty Highwayman at Saturday, October 02, 2021