Colourful Crossings - Is There Any Point?

In the earlier part of my career, I was a highway maintenance engineer where the mantra was about making things easy to repair. Years later, one of my tasks was dealing with requests for "stuff" to be placed on the highway which often didn't perform any highway function.

It is against that backdrop and that I spent hours arguing with regeneration colleagues who wanted to install public art or bespoke street furniture without a revenue budget. It's where I spent more hours telling landscape architects that I didn't really care about the relationship between the nearby river beach and the exposed aggregate concrete finish they wanted for a cycle track on the basis it was terrible for cycling on. It's also where I got into an almighty row over a scheme which was basically a local version of the Hollywood Walk of Fame which wasn't backed with a blockbuster budget. 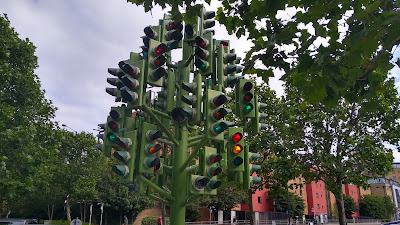 The traffic light tree doesn't perform a highway function, but I do like it. Sitting on a roundbout it very obviously isn't there to control traffic.
Out of all of this I learned that it was worth digging in and hunkering down for some things, but not worrying too much about others. What used to happen was I would give my advice and when it didn't suit the vision of the crackpot with the leader of the council's ear, we ended up having to do it anyway. My red line changed over the years to stuff which would either be dangerous (in my assessment), actually unlawful (and you can licence quite a lot of nonsense which is lawful) or create an uncomfortable user experience. Those dig-in issues became more precise and defendable.
Luckily, these days I am no longer directly in that world so much and life is calmer as a result, although I do see flare ups from time to time which are normally a result of the issues I mentioned at the start and usually over maintenance costs. When a client team wants to do stuff, but their maintenance colleagues are skint, you're going to get a flare up.
So this, in a very roundabout way, brings me onto one of the current issues being played out on our streets and that's the use of coloured surfaces at signalised pedestrian crossings. Signalised because we can't mess around with zebra crossings as the stripes are regulated, but between the studs of crossings controlled by traffic lights, we can do what we like. 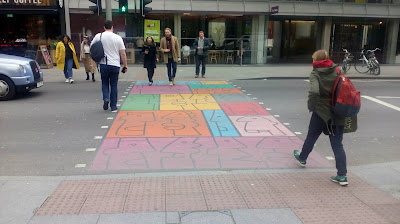 Above is an example of what I mean on Southwark Street in Central London. This one was part of a group championed by the local business improvement district, was funded by Transport for London and designed by artists and architects. On first seeing this, I didn't have any strong opinions other than tutting from a road maintenance point of view because it is going to be impossible to patch by a utility and the carriageway resurfacing bill has just gone up. However, some people have specific issues with this type of treatment.
It was only in the last couple of years that I learnt that some of these designs can create problems for visually impaired people who can struggle to work out if a dark area of a design is a pothole or not. It was even more recent that I saw a letter from the Access Association to the Government which sets out even more issues for a wider segment of the community. Some of the designs are confusing for guide dogs, some can create sensory overload for neurodivergent people and some people may be confused as to whether it's actually a crossing they can use.
On the one hand, it's of course useful to understand wider perspectives, but on the other I guess this reinforced my general dislike of adding things to streets which don't perform a highway function. Does it mean we shouldn't be throwing the paint around or promoting public art? Well of course not. Art and fun on the streets don't set out to solve a particular problem, but they can provide interest, activate a space and for some people, provide a useful landmarks in their mental maps. 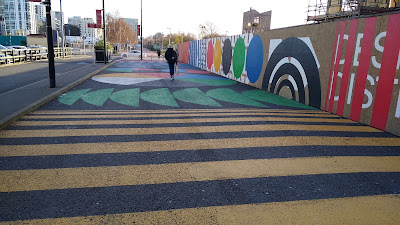 Above is an old piece of road near the O2 Dome in Greenwich, London. Paint was used to change the look of the space from a road to somewhere where people are able to safely walk. The design may well be an issue for the people highlighted above, but the principle of a bit of temporary paint pending a redevelopment is sound in my view.
In the USA, the use of paint and temporary materials has probably a longer history than in the UK, although Covid has created a climate for rapid changes here. New York City's Time Square was famously reclaimed for people using paint and deck chairs to create a public plaza which is now part of the city's fabric. Whether it's paint being used as part of a large city space or to add some fun to a modal filter (below), we certainly have a valid tool in the toolbox. 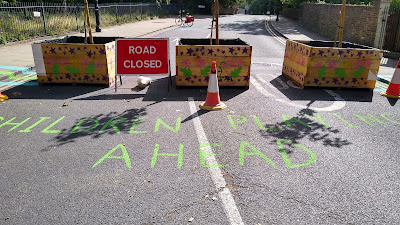 What this ultimately comes down to, I think, is whether or not the thing we wish to "improve" is part of a safety or independence critical piece of infrastructure that some people absolutely rely on. For example, advertising embedded into a flight of steps could prevent some people being able to properly identify each step and as a result either having a fall or simply not being able use them. Paint at signalised crossings is no different - we are interfering with a piece of infrastructure which for many is a safety and independence critical way to cross the road. 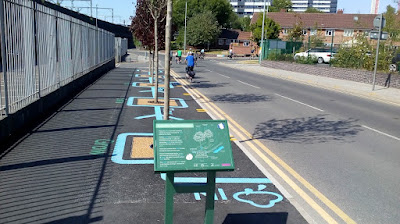 This educational piece of street drainage in Salford is definitely something little children would be attracted to with the lines and arrows to follow. But it only draws people along the street and not across it.
Let's also think about children, especially younger ones. If you've ever seen a child walk along a wall, avoid the joints in paving slabs or do a bit of hopscotch jumping as they see coloured slabs in paving will realise that bright or interesting things in the street will attract them and to this extent, colourful crossings also worry me, especially if they look like a set of jumping pads.
What is the motivation for painting a crossing? Is it because the real issue is a drab and tired looking street which needs a boost, is it to try and get people to cross in the "right place" as is currently being played out in Liverpool and by (maybe my) extension not actually dealing with underlying layout issues, or is it just a bit of ego? It's probably more complex than that because people and streets can also be complex. At least from my own experiences I think we need to be talking with the people who could be impacted by this a great deal more, although my general dislike of colourful crossings hasn't been diminished!
Posted by The Ranty Highwayman at Saturday, October 16, 2021