I quite often cycle to the shops and this week, I have a little story about a retail park I visited which probably has the worst access for those not driving I have seen for some time.

I had to go to the Argos store which is inside the Sainsbury's at Newbury Park in east London. There are closer stores and there is online shopping, but with the current "fun" of our self-imposed series of punches to our own faces, this was the only vaguely local place the thing we were after was available.
I traveled to Newbury Park along the A12 which often forms party of my cycling trips to get to places. Not because it is a nice place to cycle, but because I can stick to the paths and even with traffic rumbling past, it is still better than using the parallel A118 for many journeys.
I usual pass the Sainsbury's on the southern side of the A12 and I have never stopped there. There is a sign advertising the store (and the others in the mini-retail park) on the A12, but I hadn't realised that in fact it was some 600 metres beyond this point at the end of King George Avenue, which is also used to access a car park for Newbury Park Underground Station. 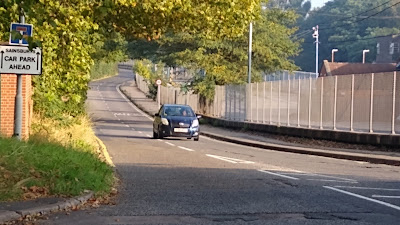 Now, it's a good job that I had a look at my route before leaving, because King George Avenue is an astonishingly hostile place. From the A12 end (above), you can see the road snaking off into the distance and despite it having a footway, this ends at the station car park and beyond that, you've a sheer wall on one side and a fence on the other - you wouldn't want to walk there and I really didn't fancy cycling in such a penned in place. 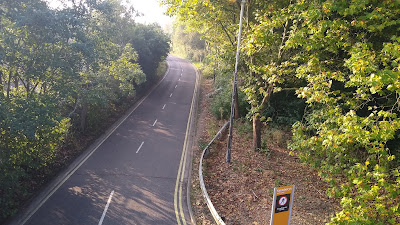 The photograph above is a view of the road from the retail park end taken from an overbridge which spans both the road and the Underground line (below) which is the route I took via the adjacent park. 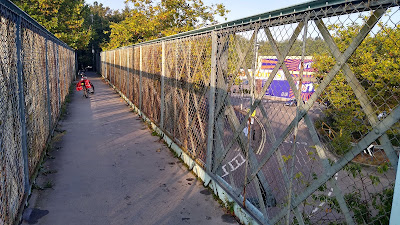 After crossing the bridge, it was obvious that I needed to somehow get down to the retail park which sits far lower. This was facilitated by an astonishing piece of switchback ramp engineering (below). 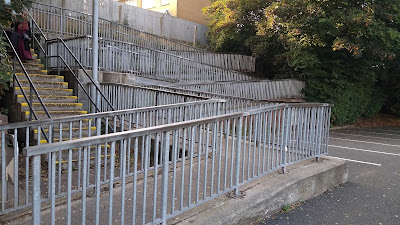 I could barely fit my bike around the bends in the ramp and leaving, I could only wheel back up it such was the combination of the gradient and tight turns. As it turned out, because I was coming from the east, the route I took was pretty direct and I didn't need to use King George Avenue. Had I arrived from the west, I would have had to have found the other end of the alleyway which connects to the ramp and then the bridge, because as far as I can work out, this is literally the only way to access the retail park if you are not using King George Avenue.
Given that housing wraps around the site on three sides, only having a single access point for walking (and those of us not brave enough to cycle on King George Avenue), this has to be way up there on a list of planning failures.
There is an apparent emergency access from Perkins Lane to the west, but the sign on the gate tells us that vehicular access is from the A12. The sign also says that pedestrian access is 60 yards away, but that's the access to the alleyway. The actual walk to the store entrance is 340 metres (372 yards). A pedestrian/ cycle access here would be 140 metres (153 yards) across the car park. If you happen to live at the end of Sherwood Road to the northwest of the site, you would be 65 metres from the entrance, but in fact you'd have to walk 620 metres!
As best as I can work out, this store dates back to the mid-1980s which might explain some of the planning decisions, but it's quite a feat to have such poor pedestrian access to a place like this in 2021.
Posted by The Ranty Highwayman at Saturday, October 09, 2021