I'm back cycling the London Cycleways this week with a look at an addition to the Central London network which opened a couple of weeks back and has overnight made life so much easier.

At the western end of the A11 Whitechapel High Street, the London Borough of Tower Hamlets becomes the City of London. This is also where Cycleway 2 (formerly Cycle Superhighway 2) ends and you're thrown back with traffic. Around a 1000 metres south, Cycleway 3 also runs east-west and people wanting to carry on to Westminster, have had to get from C2 to C3. There are a couple of north-south routes available, but they are awkward with poor wayfinding.
I was therefore pleased to see Transport for London consulting on connecting the two via Mansell Street, right where C2 ends. In fact, I'd say you could call the new route an extension to C2. Mansell Street is one-way for general traffic and is part of a larger gyratory wedged between The City, Whitechapel and St Katherines & Wapping. This has always been a tricky area to cycle around. In fact, there were plans to build this scheme in 2016, but it all went quiet.
TfL's scheme is actually experimental and part of the transport body's Coronavirus recovery response. After a short period of construction between the start of January 2022 and the end of April 2022 (26th to be precise), the scheme opened for use. The original notification for the scheme was made in August 2021 which just shows how quickly things can move. I should add at this point is because the scheme is experimental, it's construction is from simple, demountable materials and has a minimal amount of traffic signals work, but I'll come to the detail shortly. 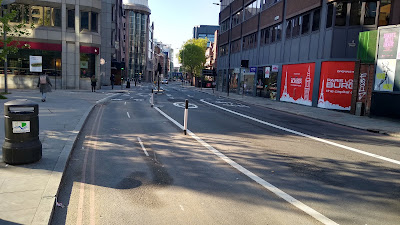 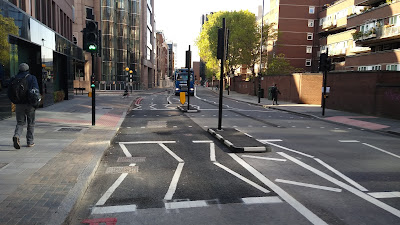 The photograph above shows an existing pedestrian crossing which has had bolt down traffic islands added to relocate traffic signals for northbound traffic with a new cycle signal for southbound cycle traffic. Access to side streets is maintained as it was before and given that the scheme is largely paint and wands at this end of the road, it does still feel exposed where drivers turn across the cycle lane (above) or if access is needed for cycle traffic to a side street on the opposite side of the road, the latter being a disadvantage of two-way provision. 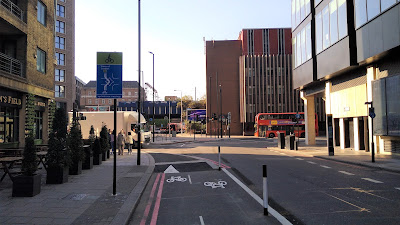 At the Prescot Street / Goodmans Yard junction, the cycle lane moves up to shared space at footway level. This has been achieved with new kerbs and an asphalt infill against the existing kerb line. This junction is an odd diamond shape with a signalised crossing on each side. The northeast crossing has been switched to a toucan to carry the cycleway link south, the southeastern crossing already being a toucan feeding a toucan on the northwesten side which goes on to a two-way cycle track on the northern side of Goodmans Yard. 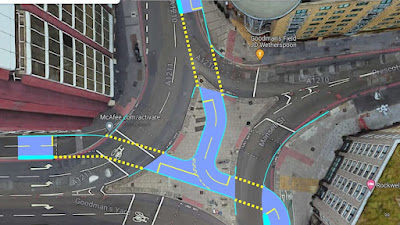 This is the least successful part of the scheme because people walking and cycling are in conflict with each other, especially on the northeast corner of the junction where there is a busy pub and where the new toucan has been added. It could be argued that the existing toucans also created this risk but this new link is going to make this location much busier. Above, is a very quick sketch of what I would like to see happen at this location, although with this, I haven't tweaked the pedestrian crossings, but we'd essentially have parallel crossings keeping everything legible. 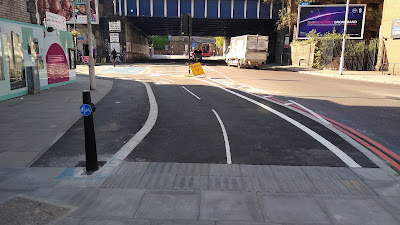 To the south of this point, Mansell Street is one-way southbound (towards Tower Bridge) and the three traffic lanes have been swapped to continue the two-way cycle lane on the eastern side with two traffic lanes remaining. In general, traffic movements have been adjusted in the wider area for many years and although the key roads remain, some have had space repurposed through development and new cycle routes. Just south of Prescot Street, an old two-way cycle track has been rebuilt and the footway widened (above). 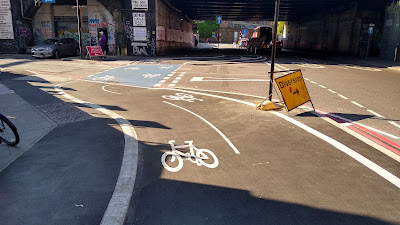 Next the cycle track (we are now at footway level) bends out from the Mansell Street carriageway with a cycle priority crossing over Chamber Street (above). This is actually just an upgrade of the old layout which implied cycle priority, but it wasn't explicit. I would have preferred a continuous treatment here, but the experimental nature of the work probably didn't justify the expense. 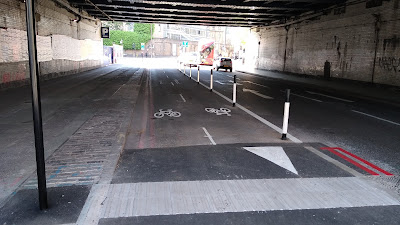 Just south of Chamber Street, you can see that the nearside of three lanes have been given over to the two-way cycle lane (above). As a consequence, the old two-way cycle track has been removed giving much more space to people walking. 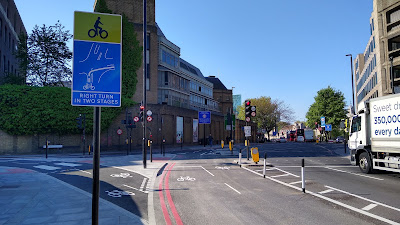 At the far south of the link, the former left turn for traffic accessing Royal Mint Street has been removed. There is a two-way cycle track link to Cycleway 3 which runs on the northern side of Royal Mint Street (above). This allows two-way cycle traffic to flow between the northern and eastern arms of what is now a connected network. One annoyance here is there is a dropped kerb across the cycle track link which really should have been asphalt to asphalt because the turns are not at 90° to the line of travel which is a slip risk on the kerbs. 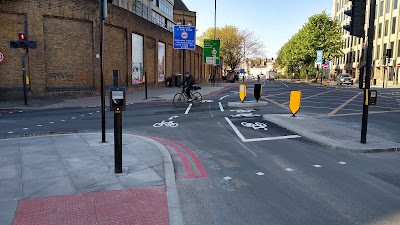 Just beyond, the scheme ends with the ahead movement merging with traffic after the Royal Mint Street junction. For those wishing to turn right to head west on Cycleway 3 on Shorter Street, there is a slightly awkward two-stage right turn (above). People need to hover by the cycle logo with the turn right arrow above it and watch for a green cycle traffic signal on the far side of the junction. The first time I tried it, I didn't realise it was a two-stage right and I waited between the two traffic islands!
We still need to look at how the scheme links at Cycleway 2, so let's head back north. For cycle traffic turning left from C2 onto the Mansell Street link, a pair of dropped kerbs have been cut in for access, which makes the eastern corner shared with people walking. It's not clear and it took me a minute to work it out. I assume it has been done like this to give a "free left" behind the pedestrian crossing over Mansell Street (below) 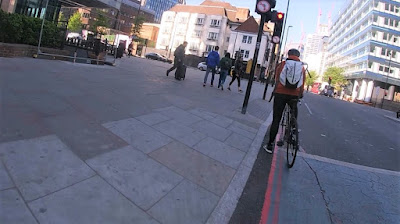 I'm not a fan of sharing like this but given it's an experimental scheme it would be a waste of resources digging this corner up now. In the fullness of time, I think this whole junction needs looking at because something like a CYCLOPS would be so much better.
For cycle traffic arriving at the north of Mansell Street, a cycle gate awaits and this one is an interesting layout (below). 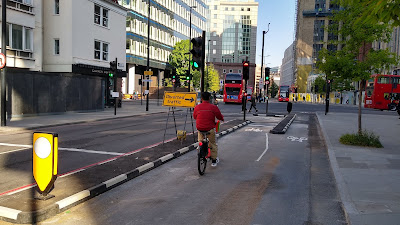 Generally, cycle gates feed from the nearside. They operate essentially as a traffic-signal controlled advanced stop line whereby cyclists enter a large reservoir with a stop line under a green signal while general traffic is held back (and a different traffic stream runs elsewhere. You can see this in the photograph below at the Bow Interchange. 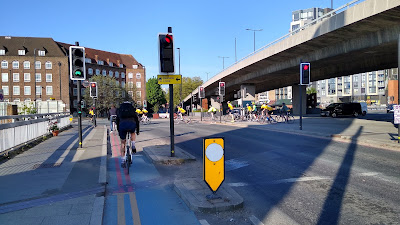 The cycle entry signal then goes red. The signals on the exit of the reservoir then go green to give cycle traffic a head start (already being spatially ahead) with general traffic being released just after which you can see in the photograph below. 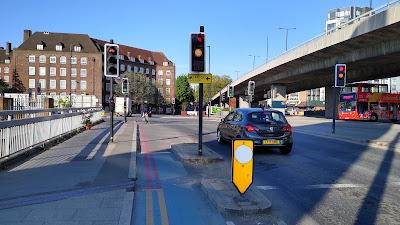 The Mansell Street cycle gate operates in the same way, just from the offside. The arrangement allows easy cycling ahead into Middlesex Street which has a with-flow cycle track just after the junction or right to head east on Cycleway 2. There is no left turn for any traffic (including cycles) because of a conflict with a pedestrian crossing on the western arm (you can just see it in the photograph below). This is likely to lead to cyclists turning left in any case and so needs looking at and I think it would be acceptable to exempt cycle traffic from the ban and have a supplementary stop line and low level cycle signals for the crossing. 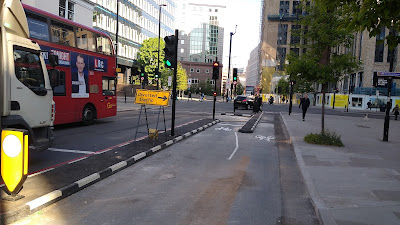 So look, there are issues which need to be sorted out, but after years of waiting, there is now a very useful and much needed link in Central London's cycling network. At a wider level, TfL has shown that it can develop and install a scheme very quickly which should give confidence to others that it can be done.
It's also worth remembering that the point of an experimental scheme is to test, monitor and consult on a scheme which the authority has ever intention of keeping and I really hope TfL does in this case and then returns to add kerbs and better junction treatments.
I'll leave you this week with a video of the new link;
Posted by The Ranty Highwayman at Saturday, May 07, 2022