In my last post, I had a look at the first and third CYCLOPS junctions built in the UK in Manchester. In this post, I head 200km southeast to look at the UK's fourth, in the City of Cambridge.

This scheme at the junction of the B1049 Histon Road with Gilbert Road and Warwick Road was opened in October 2021 just over a year after the first one in Manchester. It came to fruition thanks to the efforts of the local cycling campaign, CamCycle, which had been pushing Cambridgeshire County Council to go with the design after seeing the original Manchester plans and is part of the Histon Road transport scheme. 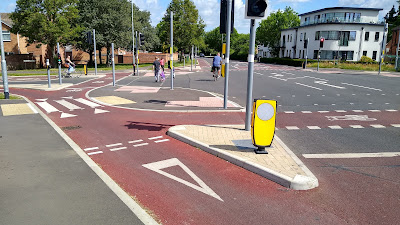 The layout of the junction is simpler and tidier than the Manchester examples because the designers have eschewed the plethora of fiddly islands in favour of corner islands which have pedestrian space set at footway level (above), together with splitter islands for each approach and exit between the carriageway and cycle track (so a total of eight). The footway level corner island means the push buttons for the pedestrian crossings are much easier for wheelchair and mobility scooter users to reach than the Manchester version which sit on islands. 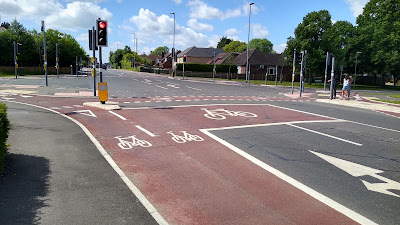 Each approach has an Advanced Stop Line (ASL) and for the Histon Road arms, access to the ASL is from a cycle lane. For the northbound direction, a section of stepped cycle track ends and becomes a cycle lane and for the southbound direction (above) this is from a mandatory cycle lane which runs for a significant distance approching the junction and so does offer as much protection.
The layout is tidy and for those going ahead who see the advantage, reintroduction to traffic is simple, but it does of course put people cycling at left hook risk and if one were turning right, then the CYCLOPS provides a safer option. This "hybrid" approach using ASLs is a symptom of traffic flow being maintained as with the first Manchester example. 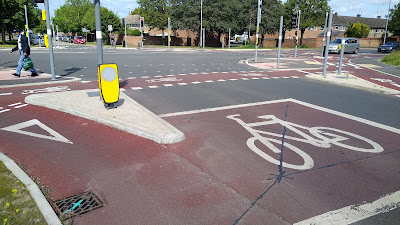 The ASLs on the side roads are fed by advisory cycle lanes and so are the exits. If we ignore the ASLs for a second, these advisory cycle lanes feed into (above) and exit from the junction (below) on the side roads and with the positioning of the splitter islands (in a nice contrasting colour), people cycling have a protected entry to and exit from the junction. This is a really important safety feature and with junctions being the collision risk, investing there with simpler link protection is a pragmatic approach and can be upgraded later, 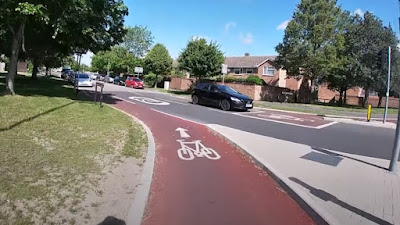 The pedestrian arrangements for the junction are very clear. There are mini-zebra crossings onto the corner islands which I prefer and there is a very shallow hump to give a more level crossing experience (below). For some reason, the designers have marked the humps as if it were a two-way cycle track which seems to be a mistake. It's not vital, but I would have quite liked to have seen the corner islands surfaced in the same light colour blocks as the splitter islands to break up the asphalt and to provide some contrast to the carriageway, but it's not vital to the design. 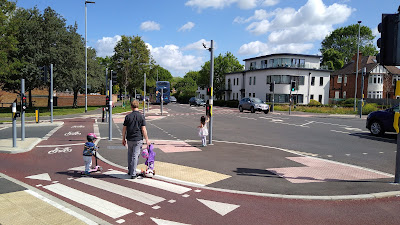 One thing which is an issues is the use of tactile paving. Mini-zebra crossings require the use of red tactile paving (almost always) whereas buff is reserved for non-controlled situations. At Histon Road, the designers have used buff with the mini-zebras which is incorrect. They have used red with the signalised crossings which is correct, but the use of the 'L' shaped layout could give the impression that this is the complete crossing. 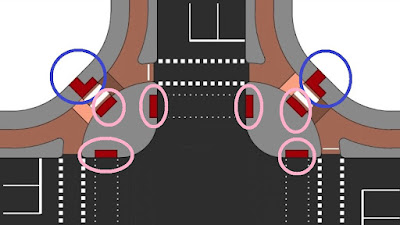 The guidance explains that we should be providing red tactiles at controlled crossings (zebras and signals). It says we should provide the 'L' shaped arrangements at the start/ end of complete crossings (circled blue in the sketch above) and where islands are part of the overall crossing, then the intermediate tactile paving is rectangular (circled pink above). This is important as it is all design to provide information to visually impaired users and I cannot understand why we keep getting this wrong. 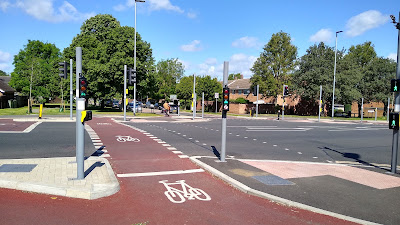 As with Manchester's layout, low level cycle signals have been used in pairs - I would like to see a large signal to be viewable approaching the junction. The cycle demand is from a push button and I am not sure if any other detection is being used because I either pressed the button or others were using the junction. 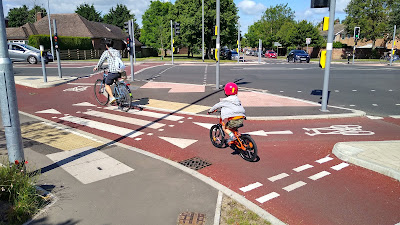 I do prefer Cambridgeshire's layout compared with Manchester's, because the island detailing is simply tidier. I also prefer the red surfacing which consistently applied across Cambridge because as well as being a warmer colour than the green of Manchester, it is also inlaid by machine for a superior finish. I also like the cycle crossings surfaced in the same material as it helps explain the orbital nature to users (above). 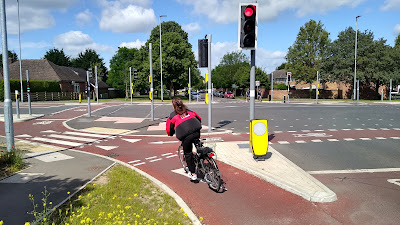 There are other nice touches. The designers have kep the kerb heights a little lower than those in Manchester so there is far less risk of catching one's pedals or wheels on them, and the Cambridge scheme has slightly wider cycle space which makes all the difference.
In the final analysis, it's great to see places copying each other, tweaking the design, and delivering safer junctions. As I said in my last post, the official guidance doesn't go into the nuts and bolts detail of this type of junction and so being able to visit schemes is going to help designers going forward. Aside from the tactile paving mistakes and the ASLs, I'd say that so far, Cambridge is the design I would probably copy because it is so much tidier in layout.
There are dozens of these junctions being planned and built in Greater Manchester, a second is under construction in Cambridge at Milton Road and they are appearing in plans all over the country, including several I have helped with the design of in my day job. It's funny really, because despite Waltham Forest bringing the Dutch approach to the UK where cycles are the inside of pedestrians (the "innie" design), it seems the CYCLOPS approach is the one we'll see most with its "outie" design. It seems that having something named allows people to conceptualise what something is, even if they don't understand the details, and because this is all aimed at the user, it's fine by me. I'll leave you with a video of the Histon Road CYCLOPS.
Posted by The Ranty Highwayman at Saturday, August 27, 2022