One of my favourite pieces of streets geekery is finding old layouts and features which have been long forgotten, but are back in fashion as something "new".

For me, the contemporary idea of Local Traffic Neighbourhoods (LTNs) is such a thing and so it is always a delight to find old examples of the concept from the days when it was simply known as "traffic management".
I recently paid a visit to East Ham in the London Borough of Newham in order to tick off a particular design of modal filter I had seen mentioned on social media. For those that don't know, a modal filter is simply a catch-all term for a range of interventions which allows only certain types of road transport modes through an area or past a point - literally filtering out the modes which may pass.
The curiosity that I wanted to tick off my list was the crossroads junction of Wellington Road with Market Street where the northern and eastern arms of the junction have been filtered. The features form part of a wider network of filters and one-way streets which removes through traffic from an area bounded by the A124 Barking Road, A117 High Street South, Flanders Road and the A406 North Circular Road. 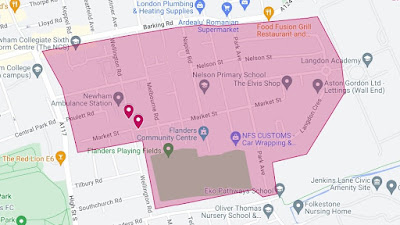 The map above broadly shows the area of the LTN, although in theory, the area to the south of Flanders Road is another big LTN and could also be argued to be part of the one I have shown with the A13 Newham Way to the far south. The two purple markers are the filters I went to see. There are bus routes running through the area which is interesting because the filters that allow them to pass, but ban other vehicles pre-date the use of cameras and so have to be physical measures, as were the filters I looked at. 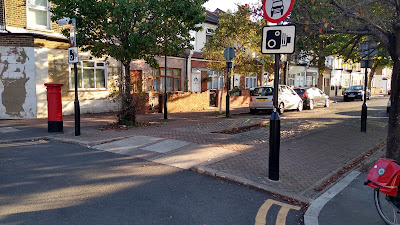 Above is a view from within the crossroads to the east at the filter in Market Street which creates a 60 metre cul-de-sac. The design of the filter is interesting and don't let the modern camera enforcement traffic sign fool you - this scheme predates the use of CCTV for enforcement. 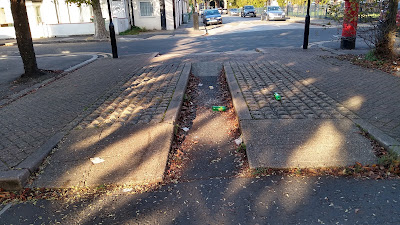 The filter was created by building the footway out on both sides (above). From there, a further pair of buildouts were constructed, but rather than having a smooth surface, they received "deterrent" paving which in this case are pyramid shaped concrete blocks, a product still available today. 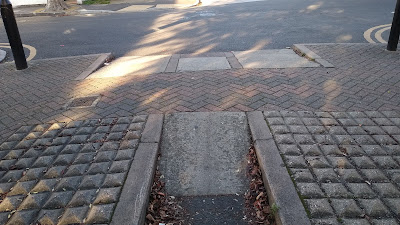 At each end of the deterrent strips there is a ramp and in the central channel which is left, there is a short section of smooth paving where people cross the side street and to allow for cycle access (above); although at 750mm wide and with full-height kerbs on the approach, it's pretty tight and many types of cycle won't get through. It's a product of its age. 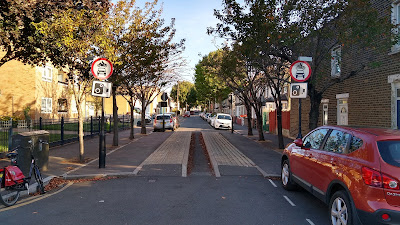 On the northern arm of the junction on Wellington Road, we have a similar layout, although the total length of the feature is nearly 17 metres, about 10 metres longer than Market Street (above, looking north from the junction). 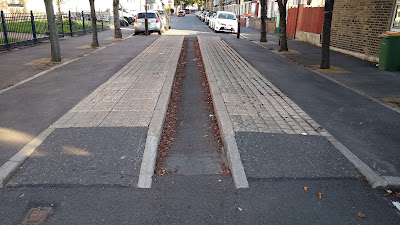 I imagine this feature is longer because Wellington Road comes directly down from the A124 Barking Road and it needed to look really intimidating to drivers because we are essentially relying on traffic signs, the physical layout and (at the time it was installed) police enforcement.
And this brings me to the age of the scheme. Well, it was implemented as an experimental traffic order which came into effect on 15th December 1987 when "Always on my Mind" by The Pet Shop Boys was at No.1 one in the UK. A permanent traffic order came into effect on 15th June 1989, when "Sealed With a Kiss" by Jason Donovan was at No.1 (no, me neither).
This time-frame has the scheme being made permanent at the very end of the 18-month maximum experimental period allowed for in the legislation and in reading the permanent order, we can see there is an exemption for the emergency services and the prohibition is on motor vehicles (so allowing cyclists), two things missing from the provisions in the experimental order, but permissible to allow in making it permanent. It's worth noting the ambulance station on Wellington Road, north of the filter.
I'll leave you with a little video of the filters with me managing to cycle through.
Posted by The Ranty Highwayman at Sunday, October 02, 2022