Well, I said that 2019 was a tough year. I didn't reckon on 2020 did I! As the year got underway, we started to hear about a virus starting to emerge and move across the planet.

On the 16th of March, I had been been in the office for an hour or so when I got a call from my boss that we were being sent home and the office closed. This was just after couple of months in a new office (which was easier on my commute time) and so with my laptop along with the mouse and keyboard I grabbed I had to set up remotely. I remember walking to Liverpool Street Station in a bit of a daze if I was being honest.
It has been a rollercoaster of a year, but one to appreciate the small joys such as the amazing air quality we had in the Spring with the roar of the traffic gone (but which has been all but squandered). It has been nice to be in touch with the seasons and getting outside more. 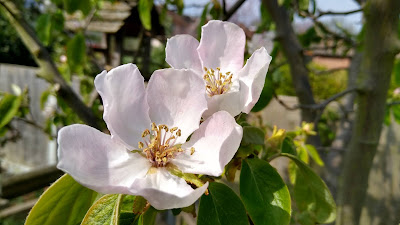 Nine months later and I now have a well-established daily routine. Work has continued to flow and my firm has worked hard to look after its staff during this difficult period. Away from the laptop, I have tried to get out cycling and on the whole I have managed to get more miles under my belt than my old local commute. Mind you, the last few weeks have been tougher with some busy project work meaning some later finishes and poor weather making it less enticing to get out.
Who knows what will happen in the coming weeks and months, although I'll be carrying on with my writing with 75 posts still to go to reach the 500 I have promised myself to get to as a milestone before I decide what to do next. Here is my 2020.
January
The year started with a short post about wonky zebra crossings which was followed by a report on my nosing round the Eddington development in Cambridge which didn't quite meet my exacting standards.
I stayed in Cambridge for my next post looking at some awful counter-terrorism barriers which created safety problems for people cycling. I rounded off the month having a look at cycle tracks with priority over roads - a quirky historic design feature which remains fully legal to this day. 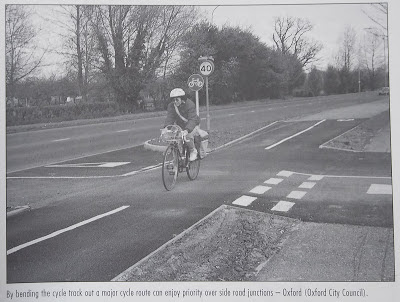 February
The month started with an introduction to Sweden's Vision Zero approach, a subject which has a fascinating history. Next was a look at liability and how designers could cope with rolling out continuous footways and cycle tracks despite being nervous using them.
Echelon parking was up next and then a post looking at an awkward junction in Chislehurst where the local council was putting driver convenience ahead of children's safety.
I rounded off February with a look at rural cycling networks which gave me a chance to relive the fun I had cycling in rural parts of the Netherlands. 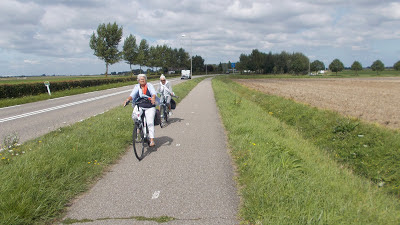 March
With the help of #TheDoodle and @LDNSharkTrike I had a look at the dynamics of riding a non-standard cycle and how gradients and space affected their use. Next was a look at footway parking (again) with the news that the Government was going to consult on dealing with it in England.
Covid-19 started to hit with force and so I wrote a few words on how being sent home from work for an indefinite period had left me rather bewildered. 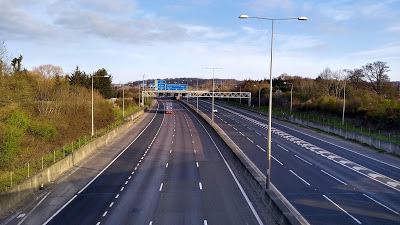 Taking stock of the new normal, I got out on my cycle and reflected on slowing down and seeing my world shrink, even if some people took the empty roads as being an excuse to drive like idiots.
April
The month started with some thinking about the concept of "flow" and how a lack of traffic during the first UK lockdown because of Covid-19 had almost had me forgetting about the act of cycling as I moved along. This was follows by a welcome return to one of my favourite subjects - kerbs - where I had a look at forgiveness.
With the impacts of the virus being felt on the public transport networks, I had a look at the legislation which could allow authorities to roll out quick changes to the street, despite a lack of interest from the government. I ended the month with a practical look at what could be rolled out quickly on the ground. 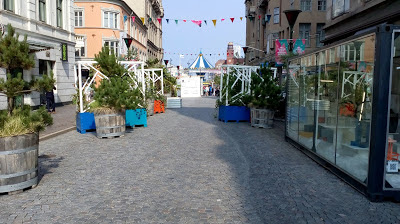 May
I had a closer look at the history of the local road system in and around the village of Terhole in The Netherlands and gave thoughts on what I thought it would take to deal with the right type of road in the right place. 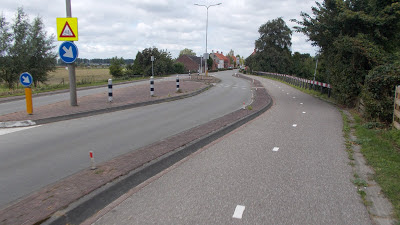 I returned to the government's transport and highway law response to Covid in which my cynicism wasn't disappointed before following up with some more examples of cheap and cheerful ways to make changes to street space quickly.
I then got out on my cycle in the first of a series of #LDNCycleSafari posts looking at infrastructure that I could reach by leg power alone. I took a look at London's Quietway 6 in the first of two posts. I rounded off May with the suggestion that most highway infrastructure is for motor traffic.
June
With my tongue a little in my cheek, I asked if cycling should be allowed on motorways. A clickbait way of looking if in fact we should be bolting on cycleways to motorway bridges crossing obstacles. I then returned to London's Quietway 6 to complete my journey from Barkingside to the Olympic Park in Stratford.
Next up was a spur of the moment piece of frivolity where I jumped on my cycle once more in search of the Traffic Light Tree, I piece of art which can be found on the edge of London's Docklands. A piece of joy for the summer. 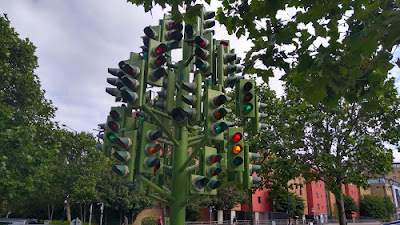 Because of the nice weather and light mornings, I headed out again at the end of June to have a look at the new layout of Waltham Forest's Whipps Cross Junction which was brilliant.
July
I blasted into July with my 400th blog post from Waltham Forest. This time, a trip along Lea Bridge Road which is probably the best urban main road design in the UK. It is protected junctions, continuous side streets and filtering. 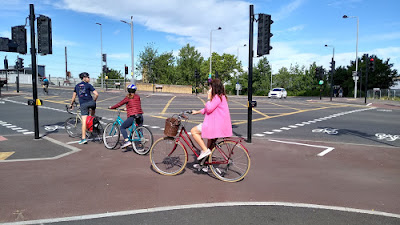 Following my post on Swedish Vision Zero earlier in the year, I had a look at the Dutch Sustainable Safety approach which is truly an integrated way at looking how roads and streets can be designed to function safely.
Next I jumped on my cycle to go and meet up with fellow blogger, Hackney Cyclist, to look around at pop-up and permanent street changes around Bethnal Green and Hackney and then a look at some new cycle tracks in the area.
August
My first August post saw coverage of the new English cycling infrastructure design guidance with the government's statement of intent on walking and cycling and the "Bike is Best" campaign which was a great counter to the noisy minority of people protesting against changes to our streets.
I then asked for some honesty from people objecting to Low Traffic Neighbourhoods to be honest about their motivations and for supporters to acknowledge genuine issues. Of course, I then got lots of comments from people making my point. SomeLTN objectors have concerns about the impact on main roads and so in the absence of credible ideas from them, I took a look at the subject in a blog post which was commended at the 2020 Active Travel Academy Media Awards. This was a lovely surprise and thanks for the nomination! 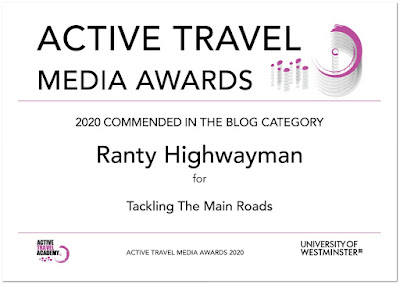 I was then back on by cycle looking at a bit of East London road building history followed by a technical post looking at when we shouldn't bother using kerbs (as shocking as the idea may be). 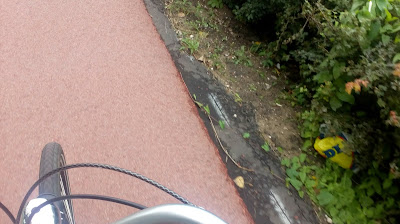 September
I was back looking at traffic signals to start September and specifically why push buttons are awkward for people cycling (and how they could be improved). Next was a look at how the UK has developed a speeding culture and why design contributes to it. I then had a look at why cycling in town centres is a network issue.
The end of the month saw a look at a random Dutch junction which didn't rely on traffic signals and how we could import the idea. 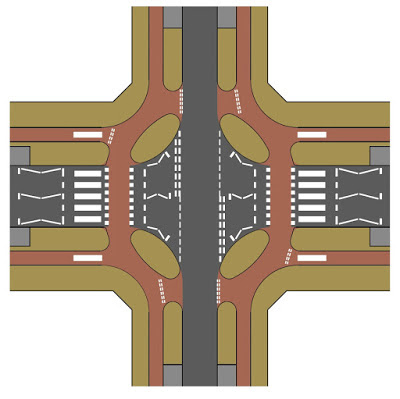 October
As the year moved into Autumn, I was out on my cycle again looking at a couple of new Low Traffic Neighbourhoods in the London Borough of Redbridge. Sadly, the schemes didn't last long after nervous councillors succumbed to noisy protests from the usual minority of people who don;t want to change their behaviour. A huge shame as the schemes improved local walking and cycling in a very hostile high traffic area. 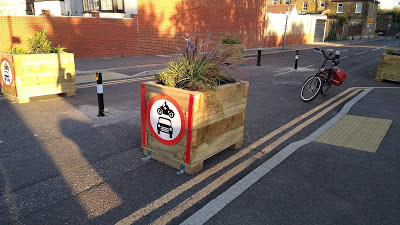 My next post was inspired by some Twitter idiocy by a literal Peer of The Realm and got me thinking all about pedestrian refuges. I then headed out on my cycle to the Newham - Waltham Forest border to look at an excellent joint scheme for Low Traffic Neighbourhoods.
The month ended with a look at a junction I had been regularly cycling through on my safaris and how after nearly 100 years, it remains terrible for those not driving and then my long trip over to Enfield in the first of a three part look at what is going in there.
November
My travels around Enfield continued with posts two and three looking at Low Traffic Neighbourhoods and cycleways. 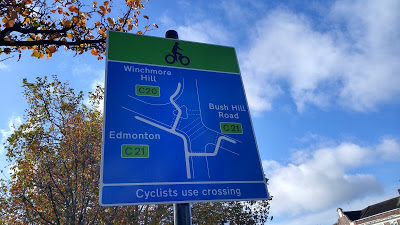 An indulgent post next with a look at the cycles I have used in the years since taking up cycling for transport, including the day to day machine which has helped me keep active over the year. I ended the month looking at the difference and overlaps between law, standards and guidance.
December
A philosophical start to the winter with my thought that infrastructure drives culture and how libertarianism is street design is the opposite of the Vision Zero and Sustainable Safety movements. I then examined why 20mph speed limits are vital in making things safer on our streets.
My final regular post of 2020 was a conversation about UK roundabout design and why we need to talk about it because we are baking in subjectively unsafe layouts all the time. 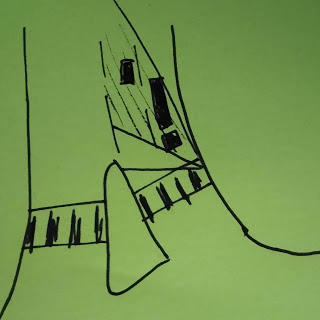 So there you have it. A year which has broken superlatives. A year which has seen misery, worry and desperation, but also one which has seen people going the extra mile for others and positivity despite what is going on around us.
2021 is not going to be any easier, but I hope I can keep you a little bit distracted with this blog, so thanks for reading and try and take a little break if you can.
Posted by The Ranty Highwayman at Sunday, December 27, 2020